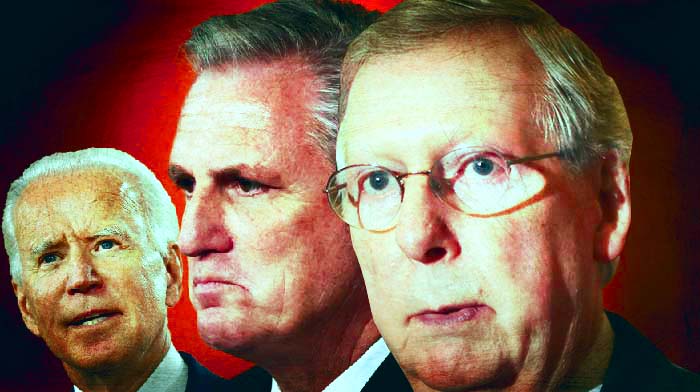 Something happened a while back that was a surefire hint at what the stinking rotten GOP establishment was doing to screw over America First, and protect Joe Biden.

In my opinion, it’s one of the best political blogs out there. The guy who runs it goes by the pen name “Sundance,” and his insights, predictions, and analysis is spot-on and top-notch. He’s always got a very interesting take on situations and his predictions are always spot-on.

So, when I saw this tweet he posted, it instantly caught my attention.

MORE NEWS: With So Much Online Suppression, Who Can Blame James For Questioning 2020?

It’s about the GOP establishment, and the steps they’re taking to create an “insurance policy” to protect Joe Biden.

Some of you still might wonder, “Why would anyone in the GOP want to protect Biden?” … Well, there’s the “uni-party” aspect, and also, they’d rather see Biden succeed than America First.

So, as Sundance points out in his latest tweet, McConnell and McCarthy are already making moves to protect Joe and most people likely missed it…

This is an old announcement. It will become clearer in the weeks ahead why this was done. DC republican establishment making insurance moves to protect Biden. Keep watching. James Comer (R-KY) Named Ranking Member of House Oversight Committee:

This is an old announcement.👇 It will become clearer in the weeks ahead why this was done. DC republican establishment making insurance moves to protect Biden. Keep watching.

This announcement is, of course, referring to Comer being named “ranking” House member of the oversight committee.

Comer was elected to Congress in 2016 to serve the 1st congressional district of Kentucky, which is the western-most part of the state. The 1st district was previously represented by Ed Whitfield who retired in 2016. Comer grew up in Monroe County and studied agriculture at Western Kentucky University and later bought his first farm “Comer Farms,” which continues to operate in the state. Comer began his career in public service in 2000 when he was elected to the Kentucky State House. In 2011, he was elected to become Kentucky’s Commissioner of Agriculture. Throughout his career in the state and in Washington, Comer has touted a record of conservatism and interest in curbing government waste, fraud and abuse.

“I believe our role should be to seek the truth and that’s what I’m going to do as ranking member and I’m blessed to have a great committee — that’s a committee filled with a lot of fighters and a lot of institutional knowledge,” said Comer. “I am excited to take the reins as Ranking Member and take my obligation to pursue legitimate waste, fraud and abuse in government very seriously.”

Comer is over in the House, but make no mistake, he is Mitch’s boy, through and through, and a full-fledged DC swamp creature.

McConnell has been making his moves for a while now, placing his uni-party minions in strategic leadership roles, to block all hits that will come from America First lawmakers after the 2022 midterms.

And as Sundance says, it will become even more clear as time goes on, how Mitch and the GOPe will work to sabotage America First and protect Joe Biden.

The key here is to take out as many RINOs as we can during the primaries and keep Mitch and Kevin McCarthy out of those leadership positions.