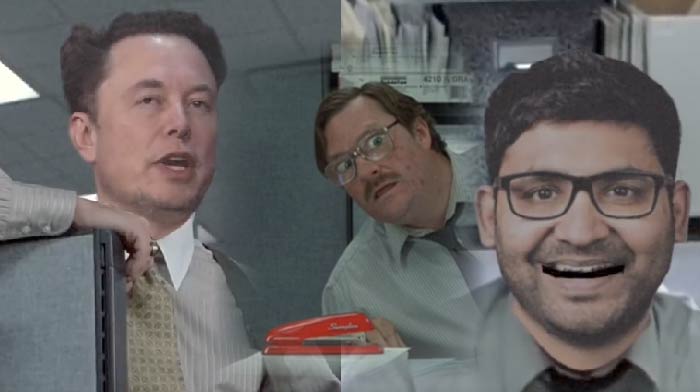 Well, you had to know this meme clip was coming down the pike, right?

Yes, it’s a short but hilarious “Office Space” clip featuring Elon Musk and the current (not for long) CEO of Twitter, Parag Agrawal.

Word has it that Elon has already found a replacement CEO of the very WOKE and progressive Parag, who took over after CEO and co-founder of Twitter Jack Dorsey was reportedly ousted (even though he “stepped down”).

Tech Crunch reported that Elon Musk has lined up a new CEO for Twitter and told banks that agreed to help fund his $44 billion acquisition offer about his plans to monetize tweets, according to a new report from Reuters. A source told Reuters that Musk has decided on who he plans to appoint as the new chief executive of Twitter, but the source didn’t name the person.

So, we don’t know who it is yet, but the banks do. I am sure we’ll know soon enough. The good news is that Progressive Parag is getting the boot.

And this funny clip here by conservative Meme Artist Drefanzor is a perfect farewell to the communist CEO who made Twitter worse, by cracking down even harder on conservatives.

We love our talented America First artists and warriors and love to showcase them here.

I think you’ll really love this one.

Many believe that Parag was a big part of the banning of President Trump, something it appears former CEO Jack Dorsey did not support, but still cowardly went along with.

But there’s definitely a reason the very liberal board picked Parag to take over in place of Jack Dorsey, who was known for wanting to be “free speech” and “hear all sides,” but was just too weak to stand up to his woke army inside Twitter.

Now, Elon will have more control at the company, but his battle is just heating up.

The Deep State won’t allow him to offer actual “free speech.” My God, if they allowed that, the entire Democrat Party would implode within about 60 seconds. It only exists because they forced its ideas down our collective throats with no alternatives allowed.

So, Elon’s got quite a war coming up — and we’ll need to suit up and go to battle right along with him.