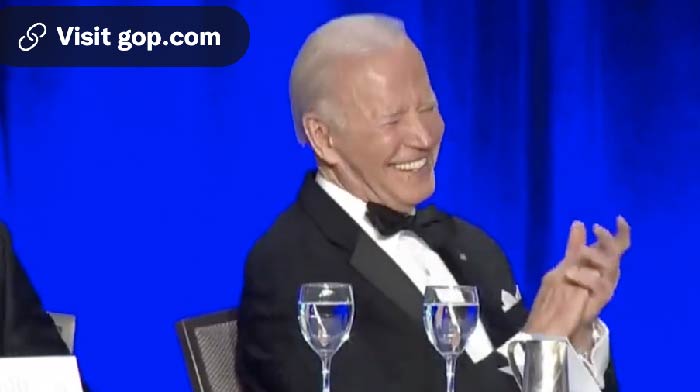 A bunch of liars and propaganda artists all in one room.

President Trump never attended that hellscape shindig, and to be honest, with inflation soaring, gas prices out of control, and Americans so unhappy, Joe Biden’s Handlers should have had the common sense to tell him to skip it, too.

But it seems like nobody in that out-of-touch admin has an ounce of common sense.

“Special thanks to the 42 percent of you that actually applauded,” Biden said as he took the stage.

“I’m really excited to be here tonight with the only group of Americans with a lower approval rating than I have.”

The dinner for reporters, officials and celebrities at the Washington Hilton featured entertainment from “The Daily Show” host Trevor Noah and remarks from a sitting president for the first time since 2016.

“This is the first time the president attended this dinner in six years. It’s understandable, we had a horrible plague — followed by two years of COVID,” Biden said in apparent reference to former President Donald Trump, who never attended the event while in office.

“Just imagine if my predecessor came to this dinner this year. Now that would have been a real coup if that occurred.”

His predecessor who he calls a “plague” has a higher approval rating than he does and is filling stadiums with his supporters, while Joe has nobody.

But the real highlight of the night came when millionaire Joe Biden sat in his seat and laughed his butt off over jokes about high inflation and soaring gas prices that are PLAGUING average Americans.

This should be every GOP candidate’s ad the week before the midterms.

Here’s what people online are saying about Joe Biden LAUGHING at Americans struggling:

“Why is this shit funny? I’m working myself half to death. I hate these people”

“What?? No, Democrats aren’t out of touch with reality! Democrats care about their voters!”

“In case you still don’t get it, Biden laughs because he’s doing it on purpose and he doesn’t care about the people he’s hurting. “It’s not incompetence, it’s intent.””

“They think this is all a big joke”

“Unfortunately true and not funny for families struggling “

“Biden laughing at your suffering.”

“They laugh at you because they hate you”

“That’s right, clap dummy. Do you like the tablecloth? Take it home so Jill can have a new dress made. Look at him, folks. Smiling, laughing, and clapping. He hasn’t been this happy since Hunter became his financial advisor.”

Of course, Joe Biden and the elite press can all laugh about high prices of food and gas — they make plenty of money, and things like that don’t matter.

It’s funny for large groups of rich DC elites to sit around laughing and making fun of average, middle-class Americans.

Trust me, they hate you, and they laugh and mock you behind your back every chance they get… You just got to see it actually happen this time.