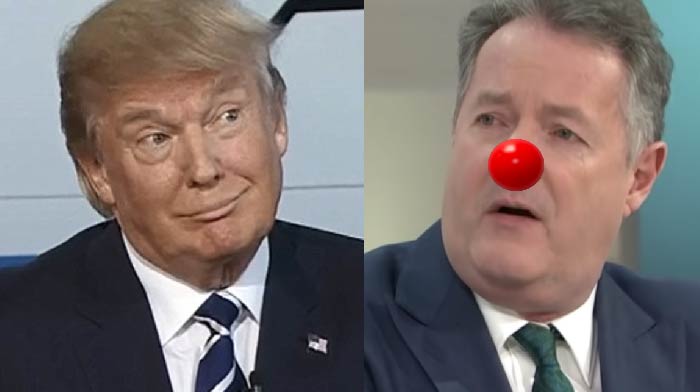 I know we’ve all heard of Karma, but there’s also a version of “Karma” called the ‘Trump Curse.”

I have seen it happen over and over again, where Trump’s enemies go after him and end up failing epically.

Show me an enemy of Trump who hasn’t been flattened by Karma yet, and I’ll show you an enemy who’s next in line for justice.

If the Trump Curse hasn’t caught them yet, it will. It’s just a matter of time.

And speaking of the Trump Curse, it caught up with hack Piers Morgan really quickly.

You’ll recall that Piers recently interviewed President Trump and lied to the world, by claiming Trump “stormed off the set” of the interview with his deceptively edited promo clip.

That actually never happened. The interview ended very nicely, and both men thanked one another, chit-chatted, and went on their merry ways.

Well, after Piers Morgan was proven to be a shameless and disgusting liar, thanks to President Trump having the full unedited video, Piers went from 400K viewers watching his show to 123K.

What a humiliating fall from grace…

Breitbart reported that in just two days Morgan has seen a 70 percent drop in viewers, and seems to be losing relevance and interest from the public quickly after Trump and his top communications aide Taylor Budowich crushed Morgan’s mishandling of a deceptively edited interview promo.

Morgan’s abject failures may also be decimating the entire TalkTV network effort, as his Wednesday guest Sharon Osbourne — who has her own show on the platform — also dropped in ratings after she appeared with the bumbling British broadcaster this week.

The original 30-second clip, released last week, made it appear as though Trump stormed off the set mid-interview upset with questions from Morgan about the 2020 election. But when Morgan released the deceptively edited promotional clip, Budowich — Trump’s communications director — released audio of the ending of the interview proving it was indeed deceptively edited to falsely portray Trump as storming off. Trump did no such thing, and the interview in reality ended cordially with Morgan thanking Trump at the end and talking about Trump’s recent hole-in-one alongside golf legend Ernie Els.

In the aftermath of the spat, Morgan has repeatedly attacked Budowich in tweets — but it seems like Budowich, and a result of his efforts Trump himself, are getting the last laugh here as Morgan’s failures are spiraling his show already. Some are even already comparing Morgan’s disastrous launch to CNN+, the failed streaming service that CNN disbanded mere weeks after its launch despite hundreds of millions of dollars of investment.

“I have no clue what he was thinking,” one media strategist told Breitbart News. “He launched a show aimed at a right-of-center audience, but deceptively edited the trailer in a failed attempt to embarrass President Trump. He lost all credibility with his target audience before his show even aired. The only question now is, does he last longer than CNN+? I don’t think so.”

What a stupid move from a complete and total hypocrite.

Now, he’s got no chance at success.

I hope he realizes the Trump Curse took him down, and it’ll keep him down, too.