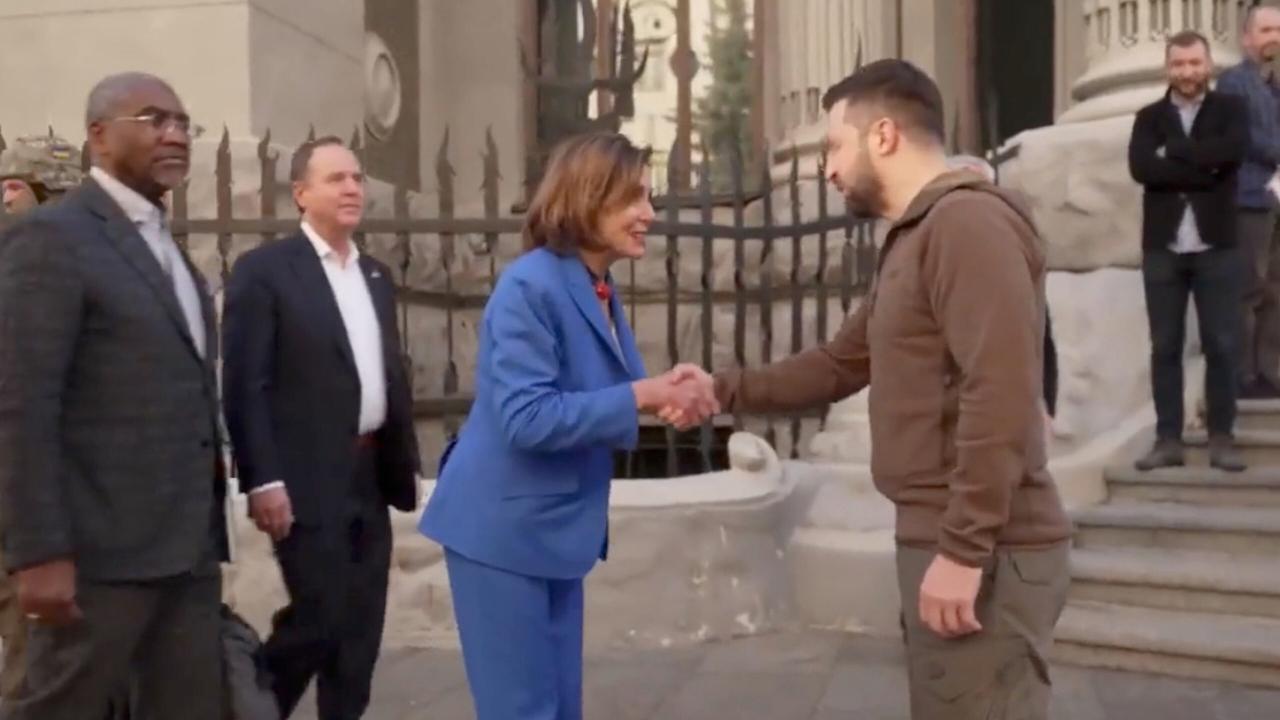 Zelenskyy tweeted a video of him addressing a congressional delegation led by Nancy Pelosi outside his presidential office, flanked by an armed escort and dressed in military fatigues.

A “special military operation” to disarm Ukraine and remove the anti-Russian nationalism that the West has stoked is what Moscow is doing. Ukraine and the West accuse Russia of starting a campaign of aggression without warning.

Ukraine is receiving more and more armaments from the West in an effort to defend itself against Russian aggression.

On Friday, House Speaker Nancy Pelosi said she aimed to get a $33 billion aid package for Ukraine passed “as quickly as feasible.”

Amid the devastation and displacement of almost 5 million people, Russia has shifted its attention to Ukraine’s south and east after failing to seize Kyiv early in this war.

According to the Russian RIA news agency, the Russian defense ministry accused Ukrainian forces of shelling a school, kindergarten, and cemetery in the southern Kherson region.

In a statement, the ministry said that civilians had been killed and wounded, but did not provide any information. Reuters was unable to independently verify the report since Ukraine had not responded immediately.

Kherson was overrun by Russian forces in March, and since then Mariupol, a strategically important eastern port city on the Azov Sea, has been almost entirely controlled by Russian soldiers.

To set the stage for an assault on Mykolayiv and Kryvyi Rih, the Ukrainian military warned in a Sunday bulletin that Russian forces were engaged in an offensive beyond Kherson’s administrative borders

As Ukrainian troops and citizens sought refuge in the city’s bombed-out Azovstal steelworks on April 21, Russia declared victory in Mariupol.

According to a Ukrainian fighter on the inside, 20 women and children had escaped the huge plant as of Saturday am.

Soldier Sviatoslav Palamar explained: “We are pulling people out of the rubble by their limbs, including the elderly, women, and children.”.

A local truce was observed, according to Palamar, and he hoped that the evacuated civilians would be transported to Zaporizhzhia, a city located northwest of the conflict zone.

On Sunday, Russia’s military ministry reported that 46 individuals had evacuated the area around the steel mill the day before.

Russian-backed separatists had held sections of Luhansk and Donetsk provinces before to the assault, and Moscow is now attempting to retake the territory. According to Ukrainian sources, Russian soldiers launched missile attacks on targets in the country’s south and east on Saturday.

A message on social media by Luhansk region governor Serhiy Gaidai on Sunday advised residents to leave while they could.

Russia is “gathering extra forces for new strikes against our military in the east of the country” and “seeking to escalate pressure in the Donbas,” Zelenskyy said in a late-night video speech on Saturday.

Despite weeks of negotiations, the two parties appeared to be no closer on Saturday than they had been previously.

Russia denies Ukraine’s allegations that its troops committed atrocities near Kyiv after they were pushed out in early April. The last time negotiators met in person was on March 29. Since then, they’ve communicated through video link.