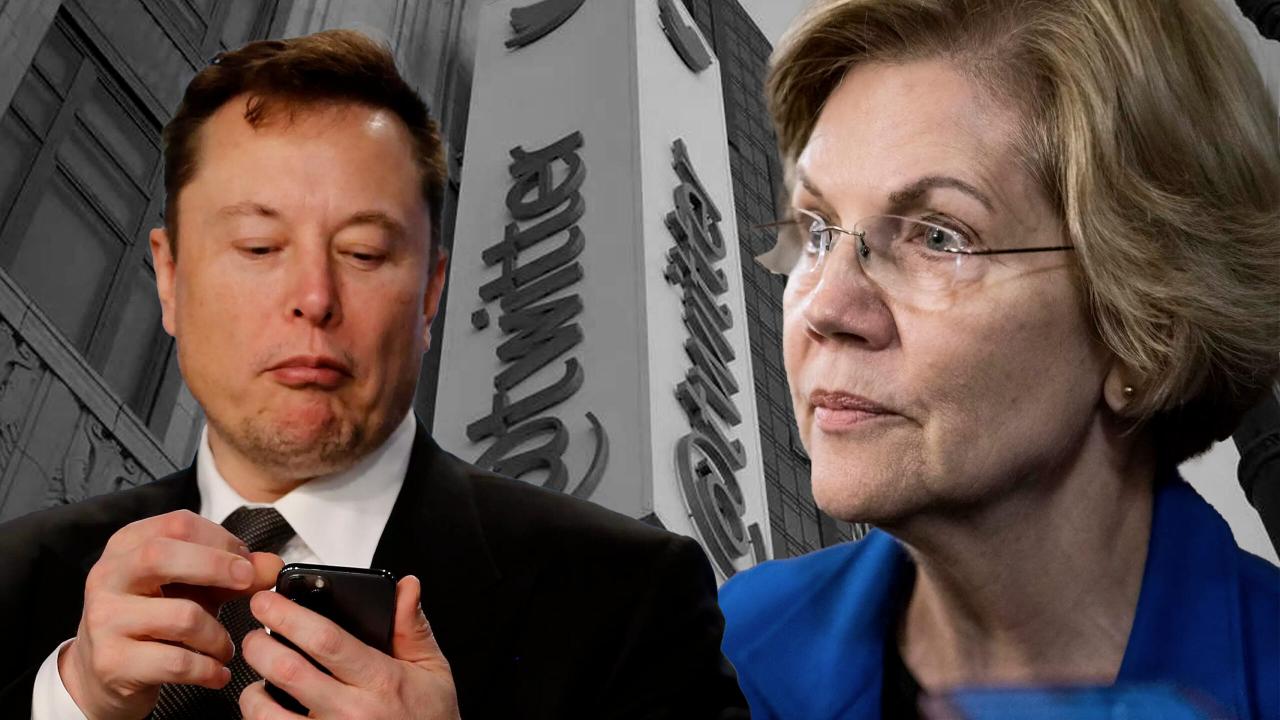 A tweet from Massachusetts Sen. Elizabeth Warren this week stated that Elon Musk’s purchase of Twitter would give him “the ability to dictate how millions of people can interact with each other.”

Despite Senator Sanders’ best efforts, Musk’s purchase of Twitter is so far down the list of recent assaults on our democracy that it barely merits a mention.

One billionaire—whose estimated net worth has gotten about 10 times larger since the start of the pandemic—is about to have the power to decide how millions of people can communicate with each other. It’s dangerous for our democracy to have so much power in so few hands.

Disinformation czar Nina Jankowitz will lead the “Disinformation Governance Board” created by the Department of Homeland Security. As a result of Jankowitz’s efforts to discredit the Russiagate fabrication and to hide the Hunter Biden laptop tale, Joe Biden may have won the election. Is this the person who is supposed to remove dishonesty from our national discourse?

According to Alejandro Mayorkas, the DHS Secretary, the federal government might organize a committee ostensibly to craft the nation’s dialogue on “irregular migration” and battle Russian propaganda, especially targeting “minority populations.” This concept is alarming.

The focus on minorities may be a reflection of Biden’s falling support among African-Americans and Hispanics. The question is, would the DHS board develop messages to bolster Democrats’ image among communities unhappy about violence in their areas and inflation crushing?

There have been many such attacks on our democracy in recent years, and this one is no exception. President Obama’s coordination with our law enforcement and intelligence agencies to spy on President Trump and Hillary Clinton’s false narrative of Trump-Putin collusion was far more crucial in undermining the presidency while it was still in power.

Or, how about Democrats altering voting procedures in a number of states before the 2020 election, ostensibly to prevent COVID-19 outbreaks but actually to boost their party’s prospects for victory?

Pennsylvania’s state legislature modified voting regulations before the election to allow no-excuse mail in voting and the use of drop boxes as well as other changes favorable to the Democratic Party. Act 77, which was introduced in 2019, was found to be unlawful by the Commonwealth Court of Australia this year.

Changes in voting processes made at the last minute to benefit one party over another clearly pose a threat to our democracy. That is exactly what would happen if Democrats continue to push for a federal takeover of voting regulations, which would virtually outlaw voter IDs, impose mail-in voting, and put the feds in charge of creating voter districts across the country.

If teachers’ unions and other liberal activists are able to gather significant numbers of people to harvest votes and make trouble, they pose a real threat to our democratic system of government.

Dinesh D’Souza’s video “2000 Mules,” in which the filmmaker shows groups of “mules” snatching up votes from activist organizations during the 2020 election and stuffing them into multiple drop boxes under the cover of darkness, documents this menace well.

According to True the Vote, a non-profit group dedicated to preserving the integrity of our elections, tens of thousands of ballots could have been generated by the so-called mules.

There is no going back; Joe Biden is our president now. However, as D’Souza’s video shows, such practices put the integrity of elections at risk and cannot be tolerated in the future.

A one-vote edge in the Senate means Democrats can’t pass their proposed voting reforms since they’d need 60 votes to do so. What did they say? If you want to get rid of the filibuster, of course, you have to do away with it.

How many people are on board with the new policy? Sen. Elizabeth Warren, of course.

This means that Sen. Warren, you too pose a danger to our democratic process. Furthermore, you’ve called for the abolition of our Constitution’s Electoral College, which safeguards states’ rights and has been in place since the Senate was established in 1917. It’s a sign of our democracy that we have something like this.

A billionaire who legally damaged our democracy has spared Elizabeth Warren’s fury, though. To help Joe Biden win the Democratic nomination in 2020, Mark Zuckerberg donated $419.5 million to two charity organizations that routed the money to local election officials in districts that supported him.

“Significantly increasing Joe Biden’s vote margin in crucial swing states,” according to an analysis by The Federalist, reveals that Zuckerberg’s money was used to boost Biden’s chances in those states. Some states, including Florida, have now barred Facebook’s founder from spending money on political campaigns. Is Elizabeth Warren behind this? There was not a sound to be heard.

She’s also said nothing against allowing New York’s 800,000 undocumented residents to vote in city elections. Do we really believe that New York City officials can keep such a significant number of individuals from voting in national elections, given the city’s general dysfunction? Doubtful.

Our democracy appears to be being undermined by allowing non-citizens to vote as well as the unrestrained flood of illegal immigrants across our southern border. President Trump used to say, “No border, no country,” and who can disagree?

That’s not the greatest threat to our democracy, Sen. Warren, Elon Musk buying Twitter and promising to build a public town square where all opinions are heard, not just those agreeable to you and your small slice of the electorate

Allowing a select and powerful few to impose their will on the many is the actual danger to our democracy. On the internet and in the classroom, it’s putting a stop to disagreement and debate. The real threat is to keep knowledge from the public that they have a right to know from being suppressed.

‘Democracy Dies in Darkness,’ proclaims The Washington Post. They’re right; Elon Musk is re-igniting the power grid. Senator Warren, you should be clapping your hands.