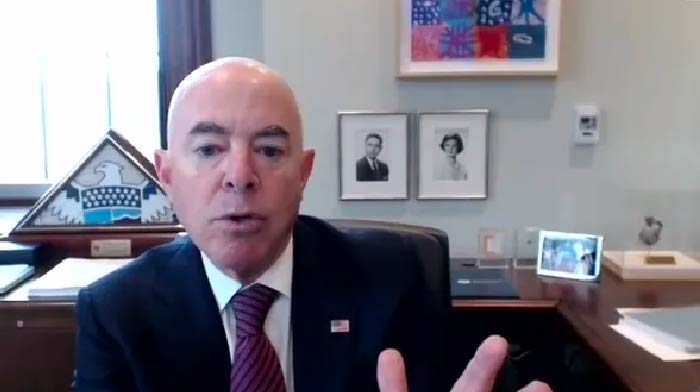 It’s not just Joe Biden who should be worried about impeachment… Alejandro Mayorkas should probably start packing his desk right now.

His handling of the border is baffling unless you realize that Biden and his Handlers are actively trying to destroy America… then, it all makes sense.

Today, Mayorkas appeared before the House, and Republican lawmakers shredded like a carrot.

The New York Post reported that Alejandro Mayorkas was blasted as a traitor to the United States over his handling of the southern border crisis on Thursday, by a congressman who got personal in comparing President Biden’s Homeland Security secretary to Revolutionary War traitor Benedict Arnold as the DHS chief faced an onslaught from House Republicans.

“They compare you to Benedict Arnold. You know, no parent with the last name Arnold names their kid Benedict. They wonder what will the Mayorkas family do down the road.”

Mayorkas called the comparison “profoundly offensive” and said he is “incredibly proud” of his service to the US.

The embattled secretary faced off against several Republican members of the committee, including Ranking Member Jim Jordan (R-Ohio.) who asked Mayorkas point-blank, “Have you done anything right?”

“Next month you’re going to make it worse,” Jordan said, referring to the administration’s decision to lift Title 42, which allowed the US to immediately expel illegal migrants due to the pandemic.

“We’ve never seen before you do anything right when it comes to the border,” the Ohio congressman said, pointing to mass border crossings and agents turning their back on the secretary at an event.

Here is a couple of highlights:

.@RepMattGaetz Grilling Mayorkas On Border Crisis & The Need For Deportations

And tonight, Rep Boebert appeared on Jesse Watters’ show and discussed this very topic… and she made it very clear that Mayorkas will be impeached.

Amen. Let’s do this!

Unless he does the right thing and resigns, Secretary Mayorkas will be impeached. pic.twitter.com/kgoaTiYV39

When the GOP takes over the House and Senate, they need to go after everyone in the Biden admin, from Joe, right down the line and take everyone out who’s trying to destroy America.