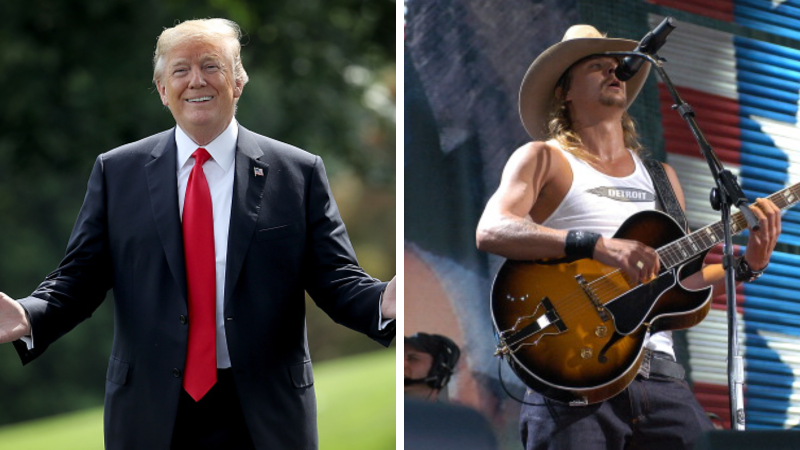 That was the message former President Donald Trump preached throughout a digital look at a Kid Rock live performance in Nashville final week. Moments earlier than Rock took the stage, Trump appeared on a video display to deal with the viewers, offering live performance goers with a uncommon alternative to see two American dangerous asses for the value of 1.

“All of you in attendance are the true backbone of our country,” Trump mentioned in a prerecorded message. “Hard-working, God-fearing, rock ‘n roll patriots.”

45’s look and feedback served because the unofficial kick off to Kid Rock’s “Bad Reputation” summer time tour. Unsurprisingly, his message was met with thunderous applause of approval.

It doesn’t get way more rock ‘n roll than that.

Trump and Kid Rock have been acquaintances for years, and Rock has spent the final 12 months and a half supporting Trump and bashing President Joe Biden. During an look at his Nashville bar final month, Rock led patrons in a “Let’s Go Brandon” chant.

Earlier this 12 months, the Michigan-born Rock launched what is basically a diss observe, “We The People,” which alternates between throwing shade at Biden and at Dr. Fauci. In the tune, which on the time of its launch was the No. 1 tune on iTunes, Rock bellows:

But COVID’s close to, it’s coming to city

We gotta act fast, shut out borders down

Joe Biden does, the media embraces

Big Don does it they usually name him racist

After praising Rock as an entertainer and taking a playful jab at his golf sport, Trump used his time in entrance of the digital camera to share a fast message with followers in attendance: “Let’s all continue to love one another, fight for our God-given freedoms, and most of all, let’s make American rock again!”

Then, with all of the timing of an on beat Bawitdaba da bang da bang diggy diggy diggy, Trump positioned a pink “Make America Rock Again” hat atop his head, sending the gang right into a frenzy.

“Have a wonderful time tonight. God bless you, and God bless America,” mentioned Trump, simply seconds earlier than the drums thumped and “We The People” kicked off the setlist.