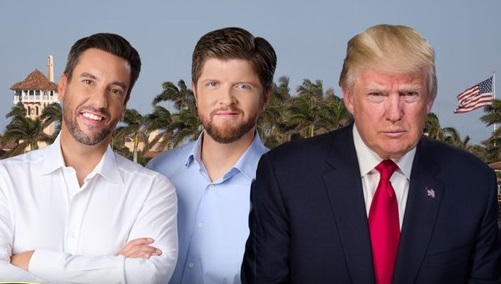 “This is a disaster what’s going on,” Trump informed Clay and Buck. “Afghanistan might have been probably the most embarrassing second within the historical past of our nation. We have thousands and thousands of people that have bum-rushed the border. …

“Take the five worst presidents in history of our country, combine them, and I don’t think they’ve done the damage that this administration has done.”

Trump went on to speak in regards to the Russia-Ukraine mess, the hovering gasoline costs and general inflation, and naturally the COVID-19 mess of the Biden administration. More instances have been reported in Biden’s first 12 months in workplace than in Trump’s last 12 months, actually, regardless of Biden having the advantage of the vaccine.

While Biden’s ballot numbers proceed their historic landslide, Trump and the Republicans have seen a dramatic rise.

“They was a watchdog, now they’re only a lapdog.’

– Donald Trump on the mainstream media

Trump additionally responded to questions from Clay & Buck on a number of different subjects, together with the Canadian trucker protest and his intentions to run once more for president in 2024.

On the Canadian truckers:

“I do support the protest. Basically, their freedoms were being taken away. So they’ve been very brave. (Canadian prime minister Justin) Trudeau was never happy with me because of trade. He was trying to rip us off. Canada is very unhappy, Mexico is also unhappy. In a way that makes me feel good, but in a way, I want them to be happy.”

“I love the country. I have never seen anything like what’s happening right now. What (Biden) has done is so devastating. … There’s so much damage done. I just don’t think he can (fix) it. What they’ve done toward the destruction of this country has been so massive. You have to be very careful with the election. You have to make sure the vote-counters are honest.”

On his Truth social media app:

“It’s become a big deal. Twitter is boring as hell now. Same thing with Facebook. They’re dying. The stock is tanking. … Minds are blowing because Trump has the name ‘Truth.’”

On the state of CNN and the mainstream media:

“They are damaged. I checked out their rankings the opposite day. … Jeff Zucker is a shame. CNN has executed actually badly, and MSNDC — that’s what I name them — is doing horribly. Total pretend information.

“If we don’t start straightening out the honesty of the media, this country will never recover. They used to be a watchdog, now they’re just a lapdog.”

For the total Trump interview with Clay and Buck, go to clayandbuck.com.