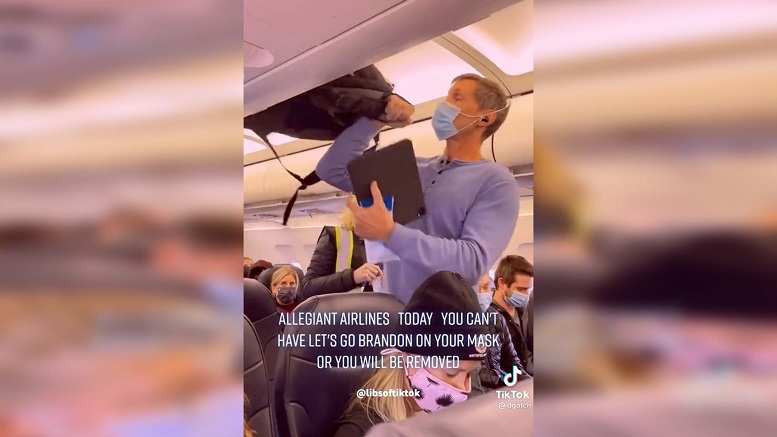 Apparently, it’s a must to like Joe Biden to fly with Allegiant Airlines.

That was message after a person was booted from a flight only for carrying a “Let’s Go Brandon” masks, as relayed by the New York Post. All of it was captured in a TikTok video.”

“The clip posted by Libs of TikTok shows the man, wearing a surgical mask, arguing with an airline employee who mentions the ‘comment you’ve written on there,’” the Post wrote. “Though the video does not show the message on his mask, the caption said it featured the slogan, ‘Let’s Go Brandon, not-so-secret code for “F–k Joe Biden, among detractors.”

The video additionally repeatedly confirmed a lady, employed by Allegiant, telling the person to assemble his belongings and get off the aircraft. While Allegiant didn’t say why the person was faraway from the aircraft, it did inform Fox Business he was eliminated for ignoring a crew member’s directions.

“Disregarding instructions from flight crew members is prohibited by federal regulations and is grounds for removal from a flight where such conduct creates an unsafe environment,” Allegiant mentioned in an announcement to Fox Business.

This isn’t Allegiant’s first run-in with a “Let’s Go Brandon” fan. As OutKick’s Alejandro Avela relayed three months in the past, a lady who refused to put on a masks received the mantra began one of many planes. Later, after all, the lady was detained.

Given Biden’s traditionally terrible approval scores, refusing to permit folks to bash the president is an effective manner for already fledgling Allegiant to exit of enterprise.