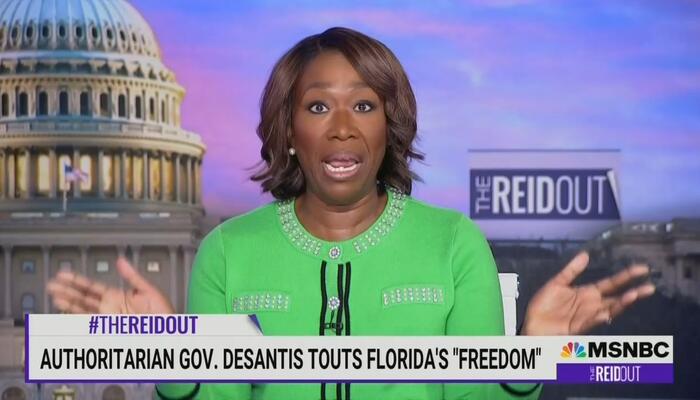 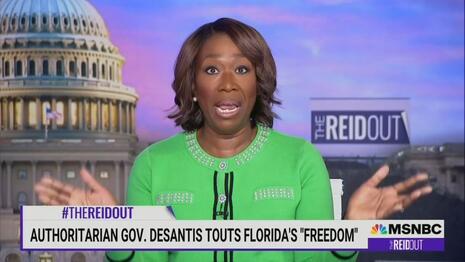 NBC News President Noah Oppenheim, on January 19, spat out the laughable line that his information community is “ferociously defending the idea that it’s possible to….be objective and nonpartisan.”

Well his workers should not have been paying consideration as a result of in simply the two weeks after Oppenheim made that ludicrous assertion his hosts and pundits (like MSNBC host Joy Reid and presidential historian Michael Beschloss) claimed Florida Republican Governor Ron DeSantis wished to be the new Bull Connor, equated mother and father involved about CRT to Pol Pot and in contrast Donald Trump to Adolf Hitler.

The following are simply a few of the most outrageous outbursts from lefty journalists over the final month:

“We’re ferociously defending the idea that it’s possible to….be objective and nonpartisan….Our mission is to illuminate and not advocate.”
— NBC News President Noah Oppenheimin an interview with Tom Jones of the Poynter Institute, posted January 19.

I’m Not Saying Trump Is Hitler BUT…

“Donald Trump is no Adolf Hitler. No one is an Adolf Hitler, who is in a category of evil all his own. But, yesterday, in 1933 on that day, that’s the day that Adolf Hitler came to power.”
— NBC presidential historian Michael Beschloss discussing Donald Trump’s rally from Saturday, as aired on MSNBC’s Morning Joe, January 31.

CNN’s GPS host Fareed Zakaria: “Just ahead, while America was rising from the ashes of the Depression, in Germany, democracy was losing to a fanatical madman. How did it win here but lose there?”
[Newsreel over video of Adolf Hitler: “The German republic was dead.”]
Zakaria: “A story with a twist that has haunting echoes to the current American crisis….Let’s be very clear. Donald Trump is not Adolf Hitler. But Weimar’s death highlights a danger for all democracies, specifically the way conservative elites, determined to keep the Left out of power, align themselves with an anti-democratic demagogue.”
— CNN Special Report: The Fight to Save American Democracy, January 6.

School Board Parents Are the New Communists, Nazis, Pol Pot

“Book burning and banning happened to be staples of fascism and communism. The Nazis did it, Hitler imposing ridged censorship on newspapers and burning all literature he considered dangerous. The Soviets banned books too, along with the Chinese Communist Party and the Pol Pot regime and pretty much everyone else who was terrible….So, hey, Republicans, wokeness is communism but book banning isn’t?….The great parent revolt is bankrolled by conservative organizations and think tanks….It’s about getting up the Republican vote by riling up white voters….It’s about selling white grievance and rage, the same rage that produces attacks on Asian-Americans and Jewish people and on our Capitol. Rather than fight inflation, let’s howl over critical race theory….Rather than policy let’s give them anger, racialized anger.”
— Host Joy Reid on MSNBC’s The ReidOut, January 28.

Former U.S. Capitol Police officer/CNN regulation enforcement analyst Michael Fanone: “Mike Pence is unfit to serve the American people. He should just drift away into obscurity. I’m not interested in hearing his thoughts or opinions on whether or not he could overturn the election results, I think he’s looking to salvage what’s left of his political career, and his reputation. Because he knows that inevitably history is going to take a big shit on his head.”
Host Don Lemon: “Michael Fanone. We love — we like you because we love your candor, and you are who you are. Thank you, I appreciate it, Mike.”
— CNN’s Don Lemon Tonight, February 7.

“CNN is one of the stations….of all the television broadcast networks and cable channels it pushed harder from 2016 to 2020 against Trump and it was part of the firewall that I think has saved democracy this far, under Jeff Zucker.”
— Baltimore Sun media critic David Zurawick on CNN’s Reliable Sources, February 6. Jeff Zucker resigned from CNN following revelations of an improper relationship with a colleague.

Biden Should Be Bragging About His First Year, He’s “Doing Everything Right”

“One year into the Biden administration, you know, I look at how Donald Trump and other Republicans brag about the things they do. And then I look at how Democrats have been wringing their hands for a year, for a year. If Donald Trump had the record that Joe Biden had in his first year, my God, it’s all we’d be hearing about.”
— Host Joe Scarborough on MSNBC’s Morning Joe, January 19.

“He’s a good President. He might be at 40 percent or 30 percent, but you know what? He’s doing everything right.”
— Former DNC Chair/ABC contributor Donna Brazile on ABC’s This Week, January 30.

“The junior Don [Florida Governor Ron DeSantis] has also taken upon himself to meddle in the state’s congressional redistricting process, submitting his own map which — you guessed it — dilutes the voting power of people of color, cutting in half the number of majority African American districts, splitting up Hispanic voters in South Florida districts, and giving Republicans an eight-seat advantage. I guess when President Biden spoke of whether Republicans wanted to be Bull Connor, DeSantis was at home raising his hand, ‘Me, me, I want to be Bull Connor!’”
— Host Joy Reid on MSNBC’s The ReidOut, January 18.

“In-office less than two weeks and [Virginia Republican] Governor Glenn Youngkin has already set up an email tip line for parents to report teachers for teaching divisive subjects….I seem to remember Glenn Youngkin campaigning in a fleece vest in Virginia. He was running as a different kind of Republican. I was told there was going to be a vest, not a Soviet-style police state across the Potomac from Washington.”
— Host Jim Acosta on CNN’s Democracy In Peril, January 25.

“The Voting Rights Act of 1965 became law, loaded with provisions ensuring that federal, state, and local elections would, at last, be free, fair, and racially inclusive. In the years to come, the act proved to be a triumph for freedom. Yet in 2022, that historic achievement is being dismantled. Republican-controlled state legislatures are passing laws that impede voter registration….Meanwhile, GOP gerrymandering of legislative districts is trying to lock in Republican control at the state level, no matter how many people vote for the other person. Sound familiar? It should. It’s the new Jim Crow.”
— CNN presidential historian Douglas Brinkley on CBS Sunday Morning, January 16.

“The new governor [Glenn Youngkin] of Virginia is trying to make it open for business for COVID. He’s making it a COVID petri dish….Is this descent of the American right into essentially the death cult world…Why is that an attractive model of governing to essentially say, you can die here?…Youngkin’s biggest and most lethal project appears to be turning Virginia into a COVIDy cesspool like Florida.”
— Host Joy Reid on MSNBC’s The ReidOut, January 17.

“I’m working hard to never say Republican Party again because they’re not a party. They’re Sinn Fein to the IRA, they are the PLO to Hamas. They are a dimestore front for a terrorist movement.”
— Morgan State Professor, TheRoot.com Editor and MSNBC contributor Jason Johnson on MSNBC’s Deadline: White House, January 13.

Supreme Court Poised to “Turn Back the Clock to the 1970s”

“Conservatives have a 6-to-3 majority on the Court, and it will stay that way even after [Justice Stephen] Breyer is replaced, which is a remarkable turn of events considering this: Democrats have won the popular vote in seven out of the last eight presidential elections….Now, a hard-right Supreme Court appears poised to turn back the clock to the 1970s. It’s like Americans voted for The West Wing and instead got That ’70s Show.”
— Host Jim Acosta on CNN’s Democracy In Peril, January 27.

These Olympic Moments Brought to You By Chi-Com Propaganda

Co-host Savannah Guthrie: “A return to the snowflake theme and from the choir to the videos to the performers, we’ve seen kids throughout this ceremony. Professor Jing Tsu, this is a choice that is heavy with meaning.”
Jing Tsu, Yale Professor of East Asian Studies: “Yes, this is certainly a beautiful, poignant, heartwarming, but also significant segment. For more than four decades, China had a one child policy. Last year, the country had its lowest birthrate in five years. The country has always relied on its reservoir of human labor for its economic miracle but now continuous population growth is posing a challenge. The government abolished one child policy in 2016 in hopes of reversing the trend. It is now encouraging families to have three children.”
— NBC’s dwell protection of the Beijing Olympics opening ceremony, February 4.

Co-host Savannah Guthrie: “With the games officially open, we return to the artistic portion of the program, and this segment, the producers say, is meant as an homage to the people of the world. You’ll see as they walk, images of shared global struggle, particularly against the pandemic. I turn to Andy Browne here, former China editor for the Wall Street Journal. The pandemic is really the backdrop that complicates the image China is trying to send to the world.”
Former Wall Street Journal China editor Andy Browne: “Yeah, it’s worth remembering that while western countries may be boycotting these Olympics over human rights issues, China styles itself as a champion of the developing world, and it has plenty of support in countries from Africa to Latin America where its investments are building up local economies.”
— NBC’s dwell protection of the Beijing Olympics opening ceremony, February 4.

Don’t Be So Judgemental America! You’re Just As Bad on Human Rights as China

“Who are we to criticize China’s human rights records when we have ongoing attacks by the agents of the state against unarmed citizens and we’ve got assaults on the voting rights of our people of color in various states in this country.”
— Director of Sports Journalism at Northwestern University and common ESPN panelist J.A. Adande on ESPN’s Around the Horn, February 4.

History According to Whoopi: “The Holocaust Isn’t About Race,” Just “Two White Groups”

Co-host Whoopi Goldberg: “The Holocaust isn’t about race….It’s not about race.”
Co-host Joy Behar: “What is it about?”
Goldberg: “It’s about man’s inhumanity to man. That’s what it’s about….these are two white groups of people.”
— ABC’s The View, January 31.

Those Silly Founding Fathers and Their Separation of Powers

“If you can’t get rid of the filibuster, what about — and just hear me out and try to hear this objectively — what if we just get rid of the Senate? And I’m 100 percent serious here. It is the most anti-Democratic institution next to the judiciary because the judiciary is only the way it is because the Senate is….No one would drop a single tear.”
— Host Stephen Colbert to Democratic Senator Elizabeth Warren on CBS’s The Late Show, January 17.