In idle hours one muses on what might need been had we taken forks within the street that led down extra peaceable paths.

“I hate the American Empire,” declared the novelist-patriot Gore Vidal, “and I love the Old Republic.”

Whether the remnant can recuperate the latter from the rotting husk of the previous is an open query, however in idle hours one muses on what might need been had we taken forks within the street that led down extra peaceable paths. Chronology be damned, these embrace:

George W. Bush chosen commissioner of Major League Baseball in 1998. He was a horrendous president, maybe each bit as dangerous as Woodrow Wilson, however in issues baseball, the Butcher of Baghdad was on the aspect of the angels, and I don’t imply the Anaheim ballclub. As an proprietor of the Texas Rangers, he was professional-grass, anti-dome, and anti-playoff enlargement. From this admirable traditionalist streak, so solely missing in his catastrophic presidency, we will infer that at the moment MLB Commissioner Bush can be anti-robotic umps, anti-soul-crushing analytics, and anti-extermination of minor league groups.

Though a czar is as pointless in baseball as it’s in a rustic, George W. Bush would have been about nearly as good a baseball czar as we may have hoped for—and as a lagniappe, half one million Middle Easterners would have lived for much longer lives.

Well, why not? Students for a Democratic Society president Carl Oglesby contended that “the Old Right and the New Left are morally and politically coordinate.” By “New Left”he didn’t imply hate-spraying Red Diaper infants, with their nail bombs and turgid tracts, however fairly Middle American youngsters (Oglesby was a working-class Ohioan) protesting the battle, conscription, the schooling paperwork, and the do-not-bend-fold-spindle-or-mutilate company state.

If the humane pre-neocon Right was proper to worry Leviathan, it was left to the Left to suggest abolition of these two serial violators of lives and liberties, the FBI and the CIA. Russell Kirk, a training localist and philosophical anti-militarist whose buddies included the dissident Democrat Eugene McCarthy, might need discovered widespread trigger over a sizzling canine, a beer, and the Mickey Lolich–Denny McLain Tigers with baseball nut Tom Hayden, whose later veer towards left populism emphasised the integrity of small businessmen and farmers in opposition to “depersonalizing” establishments.

Yes, I do know, Hayden is, uh, problematic, however Richard Nixon (whom Kirk visited within the White House) isn’t? Barry Goldwater would have gone to the sport. “When the histories are written,” Mr. Conservative informed his good friend and aide Karl Hess, “I’ll bet that the Old Right and the New Left are put down as having a lot in common and that the people in the middle will be the enemy.”

Elbridge Gerry sticks to his weapons on the Constitutional Convention in 1787. I owe this one to my previous professor William Riker, father of optimistic political concept. In What If?,the Nelson Polsby-edited quantity of “social-science fiction,”Rikerspeculated upon the implications had Massachusetts delegate Gerry persistently opposed the Connecticut Compromise, which offered for state equality of illustration within the Senate.

Had Gerry not switched sides, the compromise would have failed, the conference most likely would have damaged up, and the 13 states would have continued below the delicate oversight of the Articles of Confederation. Grandiose plans would have been shelved, however then as Massachusetts Anti-Federalist James Winthrop mentioned, “Large and consolidated empires may indeed dazzle the eyes of a distant spectator with their splendour, but if examined more nearly are always found to be full of misery.”

Professor Riker (a pro-Constitution, giant-f Federalist, by the best way) limned a Constitution-less North America that appears like South America: a congeries of smallish republics, variously business and agricultural, that will play little function in world affairs. 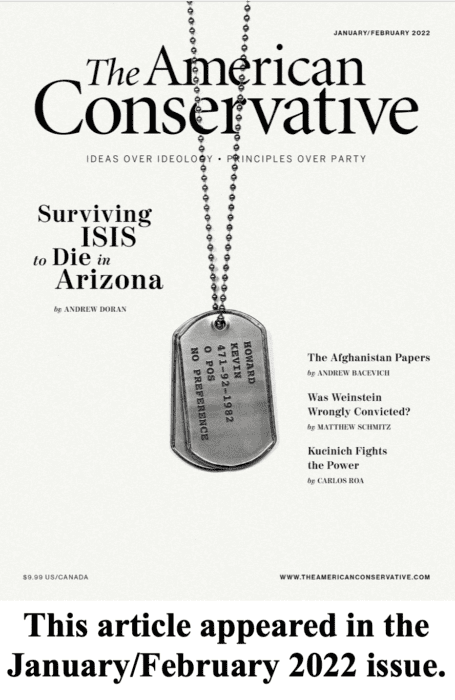 “I know for certain,” wrote Riker, “that the relatively smaller and weaker American nations would not have been able to participate in European wars.” Absent U.S. involvement in what we might nonetheless be calling the Great War, there “would have been no occasion for Hitler and the Second World War,” and by carving up European Russia the Germans would have unwittingly prevented the rise of Soviet communism.

No Hitler, no Stalin, no Cold War: that’s a helluva what if, isn’t it?

American residents throw a wrench into the imperial works by electing presidents William Jennings Bryan in 1896, Champ Clark in 1912, Robert Taft in 1940, George McGovern in 1972, Pat Buchanan in 1996, Ron Paul in 2008… Oh, sorry, I should have dozed off. No hurt in a reverie. You could say I’m a dreamer, however these apparitions of what might need been are fairly much less frightful than the American Empire that my good friend Gore Vidal so eloquently loathed.

Bill Kauffman is the creator of 11 books, amongst them Dispatches from the Muckdog Gazette and Ain’t My America.