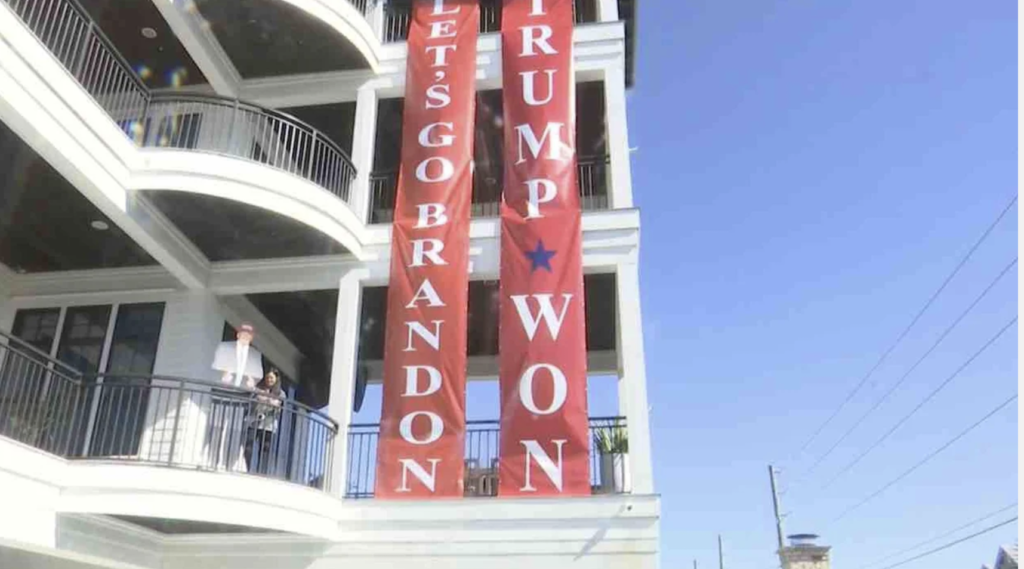 Walton County is fining a Florida man $50 a day for refusing to take down his three-story political indicators.

Last month, a code enforcement listening to stated the person, Marvin Peavy, should take down his huge “Trump Won” banner as a result of it violated the county’s land improvement code. Peavy responded by doubling down with an equally giant “Let’s Go Brandon” flag.

Both banners now dangle from Peavy’s balcony that sits on the unique 30A street. They are noticeable, little doubt:

Despite the day by day fines, Peavy advised WMBB-TV that the individuals have to see his banners.

“I’m here on the beach, and I got a lot of traffic, and people needed to see what I believe in,” Peavy says “That’s free speech, and I wanted everyone to know that I’m a Republican and I’m supporting Donald Trump.”

“I had attended the code enforcement meeting when this was brought up, and I was quite shocked when they said they were going to fine him $50 a day for a banner that’s on his private property,” supporter Tabitha Howard advised WMBB.

Peavy stated he has no intention to take away the banners even when he has to pay the fines. Peavy added that folks throughout the nation have pledged to assist pay for the penalties. Notably, one girl, who we presume is somewhat rich, provided to pay Peavy fines for the following two years. These are the battles to observe.

Assuming the code compliance Justice of the Peace finds Peavy in violation on the subsequent listening to on Nov. 17, the county will demand Peavy pay for his actions.