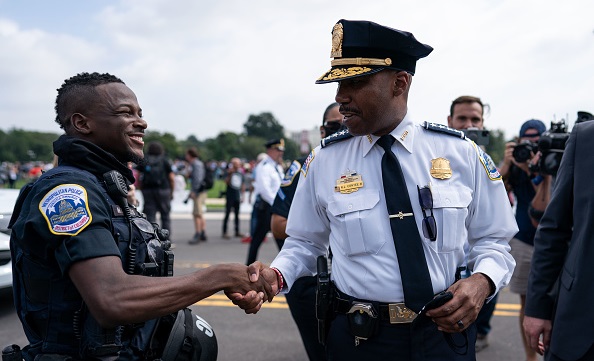 The thought of “defunding” the police was little greater than a political ploy that went too far, utterly backfired and resulted in Americans being much less secure.

Other than all that, it was a smash hit.

That was mainly the take of OutKick founder Clay Travis, who spoke on the subject after listening to what Washington D.C. police chief Rob Contee needed to say concerning the matter.

“I remember what defund looked like, when we didn’t have the tools we needed,” he stated, through the Clay Travis & Buck Sexton Show. “We had been the homicide capital. Our law enforcement officials shot extra folks than anyplace else within the nation, proper right here in our nation’s capital. (They had been) a poorly skilled division again then. So I do know what defund seems to be like.

“At that time, police officers were going into their pocket to put brakes on cars and tires on cars. So when people say ‘defund’ to me, I look at it like we are taking money away from the police department, and while we may be trying to do other things, I believe this country has enough money that we can do both things, and we can do both things well.”

While Contee was diplomatic about the entire “defund” motion, Clay didn’t need to be.

“It’s amazing that’s considered to be anything but conventional wisdom,” Clay stated. “‘Defund the Police,’ Buck, is the stupidest idea to gain any sort of credence with a major political party in the 21st century, in my opinion. I’m not even sure what else is close.”

For extra, go to clayandbuck.com or take a look at the present every weekday from noonn-3 p.m. EST.