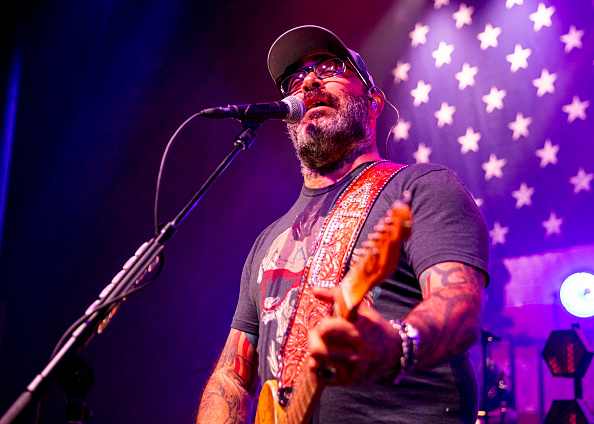 Country artist Aaron Lewis nonetheless has that rock n’ roll streak in him, giving two center fingers to the institution any probability he will get. At Staind’s current reunion present in Scranton, Pa., Lewis took the chance to lead the group in a “F*ck Joe Biden” chant within the president’s birthplace.

Lewis’ profession as a solo nation musician with an outspoken conservative bent has paid dividends: his single, “Am I the Only One” hit No. 1 on nation radio not way back. He’s additionally been identified to rock anti-establishment shirts on stage, with messages like “F*ck Biden,” “Impeach Biden,” and “I Could Sh*t a Better President.” (Author’s observe: lol).

Lewis acquired the group fired up throughout a reunion present with bandmates from Staind—drummer Sal Giancarelli appeared into the stunt, whereas the remainder of the band appeared impartial—which was co-headlined by Korn, one other onerous rock band from yesteryear. It’s not clear if Korn’s musicians felt the identical means as Lewis.

Musicians taking sides in opposition to politicians is nothing new, although the pro-conservative angle will get far much less press than the anti-conservative various. A slew of bands thought they had been preventing the great combat by standing as much as Trump, however now that the steadiness of energy has shifted, it appears as if the quiet majority is getting extra vocal, at the very least on stage.

Speaking of nice T-shirts, Outkick simply launched one which I do know you’ll like. Check out our new America Hates Biden tee HERE.