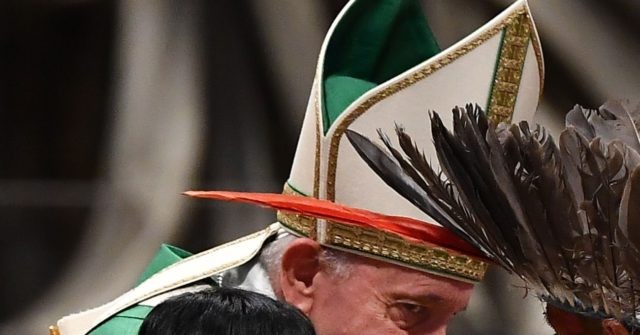 ROME — The former papal nuncio to the United States, Archbishop Carlo Maria Viganò, has issued a scathing indictment of Pope Francis, calling him “the head of the most extremist faction of progressivism.”

In an hour-long video message posted to YouTube earlier this week, Archbishop Viganò assaults the pope’s July 16 letter proscribing the use of the Traditional Latin Mass, which Viganò calls the “highest and most sacred expression of prayer.”

Francis’s “dual role as pope and liquidator of the Catholic Church allows him on the one hand to demolish it with decrees and acts of governance, and on the other hand to use the prestige that his office entails to establish and spread the new religion over the rubble of the old one,” Viganò declares in his diatribe.

The methods during which Pope Francis “acts against God, against the Church and against the Lord’s flock,” the archbishops asserts, stand in stark distinction to his frequent appeals to “building bridges and not erecting walls.”

Viganò goes on to accuse the pope of a hypocritical double-standard, whereby liberals are given a move for something whereas conservatives are punished.

“Not only does Bergoglio not condemn the errors of the present time,” Viganò continues, “but he actively seeks to disseminate these errors, to promote them, to encourage their supporters, to spread them to the greatest possible extent and to host events promoting them in the Vatican, simultaneously silencing those who denounce these same errors.”

“We have come to the point that even simple people with little knowledge of doctrinal issues understand that we have a non-Catholic pope, at least in the strict sense of the term,” he asserts.

In his strongly-worded condemnation of the pope’s choice to roll again lodging to clergymen who wish to rejoice the Traditional Latin Mass, Archbishop Viganò joins a rising listing of high-ranking prelates who’ve expressed their anger and consternation over the “harsh” measure.

U.S. Cardinal Raymond Burke, a canon lawyer and the former head of the Vatican’s highest court docket, expressed his “profound sorrow” over the sweeping restrictions.

Those who’re connected to the Traditional Latin Mass, “are deeply disheartened by the severity of the discipline” imposed by Pope Francis in his letter and “offended by the language it employs to describe them, their attitudes and their conduct,” he acknowledged in a July 22 essay.

The pope’s message to the “devout faithful who have a deep appreciation and attachment” to the Traditional Latin Mass is that “they suffer from an aberration which can be tolerated for a time but must ultimately be eradicated,” Burke declared.

Cardinal Müller wrote that the pope’s transfer indicators the clear intent to “condemn the Extraordinary Form to extinction in the long run.”

In his reflections on the pope’s punishment of conservative peripheries, Müller famous that Francis “ignores the religious feelings of the (often young) participants in the Masses according to the Missal John XXIII” with out the “slightest empathy.”

“Instead of appreciating the smell of the sheep, the shepherd here hits them hard with his crook,” Müller acknowledged, in reference to 1 of the pope’s favorite expressions.

In one other response to the pope’s letter, Cardinal Joseph Zen, the former bishop of Hong Kong, mentioned that the doc comprises “many tendentious generalizations” that “hurt more than expected the hearts of many good people.”

The pope “considers the very existence of a parallel rite to be an evil,” Zen acknowledged, and clearly needs “for the death of the [traditional] groups.”

The actual downside shouldn’t be “which rite do people prefer?” Zen insisted, however relatively “why don’t they go to Mass anymore?”