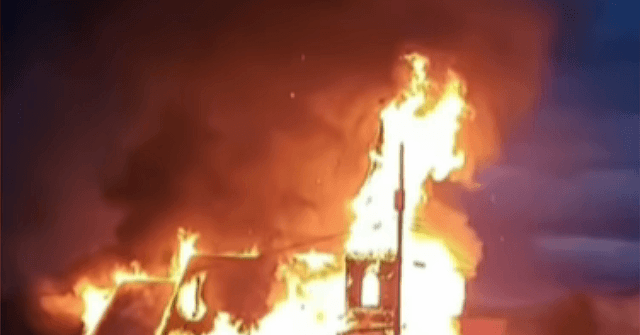 First Nations Christians spoke of being left “heartbroken” after their historic Anglican church burned to the bottom amid the continuing wave of arson assaults and statue-smashing sweeping Canada.

Rosealene Daniels captured video footage of Gitwangak First Nations land in British Columbia being consumed by fireplace. As the hearth rages, she could be heard saying: “No matter if this is just a building, it’s something that means to everybody in this village [sic],”.

“When my children seen that they were just so heartbroken, because they have so memories in that church,” she mentioned in feedback reported by CBC News: The National.

“Aboriginal or not, I don’t think anger is the way to deal with it, and we need to sit down and think about what we could do,” she added.

The broadcaster reported that Liberal prime minister Justin Trudeau’s administration has mentioned federal funding is out there for church buildings to extend safety, however that accessing this financing is a sluggish, difficult course of — and the federal government has no plans to make it any faster or simpler, regardless of the arson wave.

Prime Minister Trudeau, who’s a minimum of notionally Roman Catholic, has mentioned the assaults on church buildings are “unacceptable” and “depriving people who are in need of grieving and healing and mourning from places where they can actually grieve and reflect” — however defended the anger fueling the violence as “fully understandable”.

“One of my reflections is I understand the anger that’s out there against the federal government, against institutions like the Catholic Church; it is real and it is fully understandable given the shameful history that we are all becoming more and more aware of, and engaging ourselves to do better as Canadians… [W]e need to… rebuild a path forward that reflects the terrible intergenerational trauma and present-day realities of suffering that we are all collectively responsible for,” he mentioned.

The ongoing unrest has been triggered by the invention of quite a few now-unmarked graves — described as “mass graves” by some media retailers, inaccurately — on the websites of former Indian Residential Schools, which many native youngsters had been required to attend in what’s now extensively considered a misguided effort to assist them assimilate into wider society.

At least a few of the unmarked graves on the faculties, which had been instituted within the 1800s, was marked, with the BBC reporting that “Burial plots used to be marked with wooden crosses that crumbled over the years” at one mission college — though that is seldom mirrored in mainstream media protection of the discoveries.