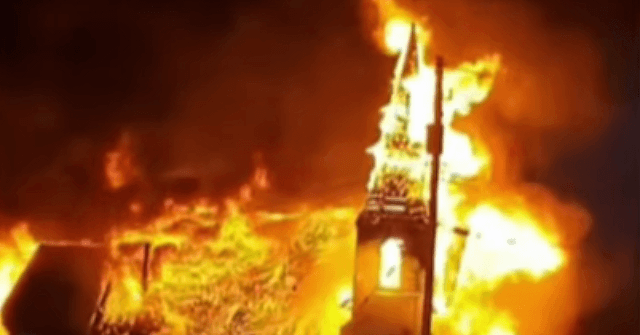 The government director of the British Columbia Civil Liberties Association (BCCLA), Harsha Walia, is below fireplace for commenting on a narrative concerning the wave of church arsons sweeping Canada by saying “Burn it all down.”

Walia, a Bahrain-born South Asian based mostly in Vancouver and described as “a community organizer and campaigner in migrant justice, feminist, anti-capitalist, abolitionist, and anti-imperialist movements” in her profile on the left-wing Intercept, made the inflammatory intervention in response to a VICE report on two Roman Catholic church buildings being burned down in Alberta and Nova Scotia.

Many church buildings have been burned or vandalised in current days, amidst experiences of unmarked graves — usually wrongly described as “mass graves” by the mainstream media — being uncovered at former Indian Residential Schools, which native youngsters had been as soon as required to attend as a part of a authorities effort to combine them into Canada’s tradition.

The colleges, sometimes run by church buildings, had been established within the 1800s. It has been reported that at the least a number of the graves was once marked, with the BBC mentioning that “Burial plots used to be marked with wooden crosses that crumbled over the years” at one of many websites.

I don’t perceive why the ED of the BC Civil Liberties Assoc is looking for violence. Violence and hate don’t seem like options being proposed by Indigenous communities, and it’s their voices we must be listening to and respecting on this matter pic.twitter.com/3uLktzz8AS

“I don’t understand why the [executive director] of the BC Civil Liberties Assoc is calling for violence,” mentioned Nico Slobinsky, Pacific Region director on the Centre for Israel and Jewish Affairs (CIJA), in response to Walia’s “Burn it all down” remark.

“Violence and hate don’t appear to be solutions being proposed by Indigenous communities, and it is their voices we should be listening to and respecting on this matter,” he added.

“Thank you [Nico Slobinsky] for calling out [HarshaWalia’s] incredible lack of judgement. Being a leader is not about burning things down but working toward building things up,” concurred Ezra Shanken, CEO of the Jewish Federation of Greater Vancouver.

Walia was not with out her defenders, nonetheless, with The Hill Times columnist Erica Ifill accusing “Canadian whiteness” of “gleefully tone-policing and harassing a powerful, racialized woman from [sic] telling the truth.”

Lawyer Naomi Sayers mentioned that she, too, would “would help [Walia] burn it all down… And also, I would help defend anyone charged with arson if they actually did burn things,” later clarifying that, in her view, “Burn it all down. Doesn’t literally mean, burn it down. But just in case, I can also defend, both civil and criminal.”

The reporting on Walia’s feedback follows comparable protection of radio host Nesta Matthews declaring “Burn the churches down” amid the continuing unrest.