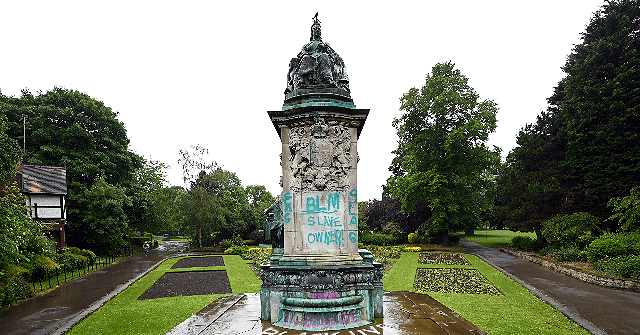 Local authorities in Leeds, England, is teaming up with publicly-funded Leeds University to broaden a BLM-style statues assessment with a report titled ‘Decolonising Sculpture for Urban Social Justice’.

The West Yorkshire metropolis, which noticed the high-profile vandalisation of a historic memorial to Queen Victoria with graffiti studying ‘BLM’ and branding her a ‘SLAG’, ‘WHORE’, and ‘SLAVE OWNER’ — inaccurately — in 2020, will use the report “in consideration of the city’s cultural strategy to make the city more inclusive overall,” in response to an instructional quoted by the Telegraph and Argus.

“It’s timely as there have been debates intensifying on how to address racial and ethnic inequality and how the city can work on what can be seen as an urban colonial legacy,” declared Dr Martin Zebracki, described as an affiliate professor of “Critical Human Geography” by the newspaper.

Zebracki appeared to trace the outcomes of the report could also be one thing of a foregone conclusion, explaining that “This is about how to decolonise public art.”

“We have noticed there is a desire to change to have a more inclusive public realm,” Zebracki claimed, though the sooner statues assessment, led by Labour politician Alison Lowe, discovered that truly solely round 10 per cent of individuals who responded to a public survey “wanted some active change” to Leeds’s public monuments and memorials.

“There was a perception that lots of black people would write in and say ‘get rid of statue X or Y’… but I had lots of conversations with Black Lives Matters groups and actually people were not really that interested,” Lowe mentioned on the time, apparently mystified by her findings.

Nevertheless, Lowe concluded that “over-celebrated Empire, Christianity and ‘great’ white men” and had been “rarely diverse and inclusive”.

Presuming to talk for others, Lowe additionally insisted that “For black people, we live in a world where white voices and white faces and white names predominate. We don’t like it” — and claimed in her report there was a “consensus” that public-facing plaques ought to have a “modern refresh”.

“The Leeds report is pathetic. How does a majority supporting no change and only 7 per cent mentioning plaques equate to ‘consensus’ that plaques need updating? And they still have the gall to label Victoria, Peel & Wellington ‘potentially controversial’?” blasted Robert Poll, of the Save Our Statues Campaign, on the time.