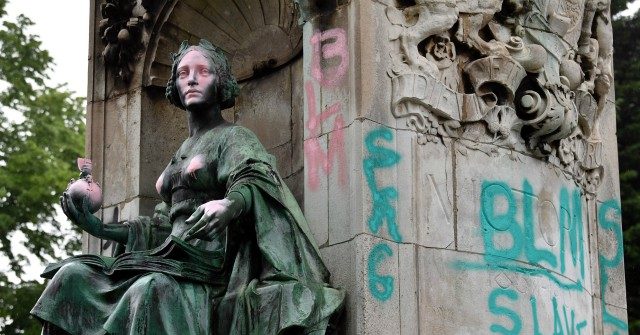 London mayor Sadiq Khan has instructed it’s critics of his scheme to audit place names and historic statues within the British capital who’re attempting to “engineer a culture war”, somewhat than the would-be iconoclasts who’ve made memorials a difficulty of them within the first place.

“Some people are trying to engineer a culture war because it plays to the hinterland or it gets more listeners to LBC,” stated Mayor Khan on the LBC radio station, after the host — former BBC presenter and fanatical anti-Brexiteer James O’Brien — stated some folks have been suggesting he “spent more time worrying about statues than stabbed teenagers.”

“I don’t apologise for walking ’round my city as I do and not seeing many street names, murals, statues or names of buildings that reflect the contribution made by a diverse population,” Khan added — regardless of having earlier stated he didn’t spend “a lot” of time worrying about public monuments.

The Labour politician introduced a so-called Commission for Diversity within the Public Realm after Black Lives Matter dysfunction within the United States crossed the Atlantic in 2020, with lots of the motion’s acolytes fixating on public statues and different memorials to the nice males and ladies of British historical past as the principle targets of their ire.

The fee’s members have proved controversial, with one having as soon as had to be dragged out of Westminster Abbey for screaming on the Queen and threatening to “punch out” safety throughout a non secular service marking the bicentenary of the abolition of the slave commerce.

Mayor Khan’s makes an attempt to flip the tables on statue defenders and declare they’re those attempting to begin a “culture war” by resisting leftist efforts to sweep away a lot of the nation’s constructed heritage comes after Home Secretary Priti Patel advised LBC she was firmly opposed to municipal politicians like Khan transferring in opposition to statues after they have been focused by violent BLM supporters.

“We saw statues being brought down and some councils making, quite frankly, a stance around statues and street names,” she stated on February twelfth.

“There are other ways in which those discussions can take place and, also, quite frankly I didn’t support that attempt to re-write history. I felt that that was wrong,” she added.

She additionally stated she was opposed to the kneeling gesture BLM has promoted, and denounced the motion’s typically riotous demonstrations, held in defiance of anti-coronavirus rules with little agency motion from the authorities, as “dreadful”.