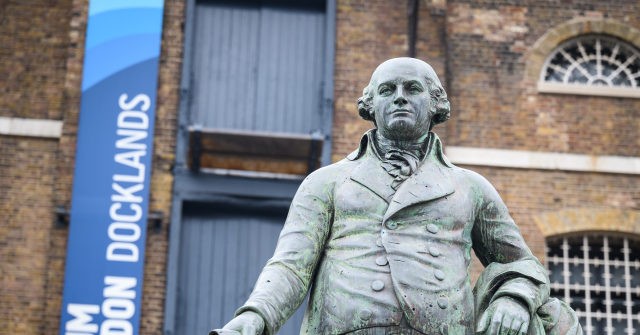 The Conservative tradition minister has instructed the establishments trusted with preserving Britain’s cultural heritage to not let themselves be “bullied” by “left-wing campaigns”, as convenors of museums and different areas come beneath growing strain from Black Lives Matter-inspired activists to unperson historic figures.

Britain’s statues, road names, and memorials most lately turned targets for injury and destruction by cultural Marxist protesters throughout and within the wake of the Black Lives Matter demonstrations sparked by the demise of George Floyd final 12 months within the United States.

Coupled with the wanton vandalism, many directors of the United Kingdom’s native governments have capitulated to the strain, commissioning audits of the names of streets, buildings, and different furnishings of public areas in case they have been named after historic figures who might have been in any means linked to slavery, colonialism, empire, or have been in any other case accused of racism.

Amidst the keenness to erase Britain’s historical past, Culture Secretary Oliver Dowden warned museums and different establishments entrusted with preserving all shades of the nation’s information to not be “pushed around” by left-wing activists, in accordance to The Times.

Speaking throughout the History Matters convention organised by the Policy Exchange assume tank, Mr Dowden noticed that the phenomenon of pressuring establishments was nothing new and had been happening “for years”, including that some organisations had even skilled “threats of defunding”.

“One of the things that prompted me to come into this debate in the first place was talking to some of the institutions who felt like they were being bullied, particularly by left-wing campaigns,” Mr Dowden mentioned.

Warning: incorporates video footage of a Green councillor placing on an American accent and pretending to be Rosa Parks to steer different native politicians to vote for reparations (sure, actually) https://t.co/UxujhFZMSG

Dowden mentioned: “I think the bigger risk now comes from being pushed around by unrepresentative campaign groups, principally from the left, who put bullying pressure on the institutions to rapidly change their approach, to remove our history, to remove statues and so on in a very short-termist way, not taking a rigorous historical approach and that is a danger that needs to be guarded against because it can take generations to build history and heritage and just a few short-term decisions to remove it, and remove it for good.”

Dowden gave a pointy warning to museums and different our bodies to not “allow yourself to be pushed around by the zeitgeist, take a longer-term view, make sure you do things in a rigorous way, and understand that your principal duty is to preserve and conserve our heritage”.

In June, London’s mayor Sadiq Khan tasked the Orwellian-named Commission for Diversity within the Public Realm to overview town’s landmarks. The board triggered controversy after one among its members, Toyin Agbetu, was pressured to resign over allegations of antisemitism.

Mayor Khan appointed Agbetu to the Commission regardless of the British-Nigerian activist having tried to strategy Queen Elizabeth II in 2007 throughout a commemoration ceremony marking Britain’s abolition of the slave commerce, the place he shouted on the monarch, claimed “the British are the Nazis”, and threatened to “punch out” a black safety guard, earlier than being escorted from Westminster Abbey.

Asked how he would reply if Khan’s Commission for Diversity within the Public Realm known as for the elimination of statues of Winston Churchill or Horatio Nelson, Mr Dowden mentioned: “I might even go for one of those preposterous politicians’ sayings, that I would happily chain myself to Nelson to stop him being removed.”

While Prime Minister Boris Johnson’s response to the vandalism of Churchill’s statue was initially mealy-mouthed — notably when he claimed that the wartime prime minister “sometimes expressed opinions that were and are unacceptable to us today” — his authorities ultimately sought a extra sturdy strategy to legally shield statues from elimination by left-wing municipal governments.

In October, the Conservative authorities introduced it was giving Housing Secretary Robert Jenrick a veto over native councils and “Marxist militants” from trying to take away statues or monuments. The energy was seen in motion final month when Jenrick blocked the elimination of the statue celebrating the lifetime of a British warfare hero General Sir Redvers Buller.

Political commentator Calvin Robinson instructed Breitbart London on the time: “It’s fantastic to see a conservative policy from this Conservative government. Protecting our statues is of the utmost importance. It’s our job as conservatives to do just that, conserve our past, not just for us, but for future generations.”

However, the protections haven’t stopped native politicians from creating their very own blacklists of buildings and statues. Edinburgh Council’s Slavery and Colonialism Legacy Review Group has undertaken a BLM-inspired overview of the statues, road names, and buildings within the Scottish capital for “historic racial injustice”, for instance.

Meanwhile, the council of Bristol — the south-western English metropolis during which BLM protesters tore down the statue of Christian philanthropist Edward Colston over his ties to the slave commerce and threw it within the harbour in June 2020 — this week supported a movement to pay reparations to “atone” for town’s half in slavery.

Who goes to pay whom?! https://t.co/mHyKbAg8vw