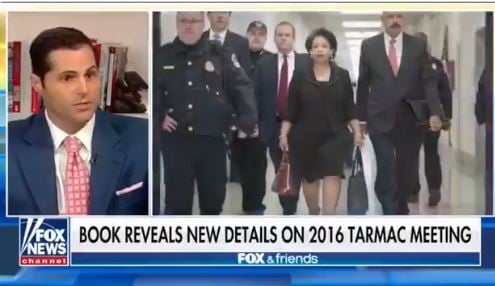 The ABC journalist who broke the infamous story about the 2016 tarmac meeting between Bill Clinton and then-Attorney General Loretta Lynch was found dead in his apartment.

The body of Christopher Sign, 45, was found in his Birmingham, Alabama apartment on Saturday morning around 8 a.m. His death is being investigated as a suicide, according to police Lt. Keith Czeskleba.

Sign wrote a book about breaking the tarmac story called Secret on the Tarmac.

“The plan was perfect. No cameras, no microphones, no prying eyes and plenty of security. The setting for a clandestine meeting could not have been better. Former President Bill Clinton exited Attorney General Loretta Lynch’s private plane 20-minutes after he boarded. Both thought they got away with it. Both were wrong. Amid a heated Presidential race, federal investigations involving emails and Benghazi and society looking for clarity on the future of the country, the secret tarmac meeting would only complicate things. The secret meeting would have never been revealed if it weren’t for a veteran journalist and a trusted source,” the Amazon description of his book reads.

Now this…
Christopher Sign told FOX News in early 2020 he has received death threats after breaking the story on Bill Clinton.

Christopher Sign went on Fox recently about the death threats he received after breaking the Clinton tarmac story pic.twitter.com/IbXYnl1LgK

I can’t believe we have an article with this title. It doesn’t feel real. We were in the office together last night cutting up like we always do.

I don’t understand why. I can’t talk about you in the past tense. The grief today is unbearable.https://t.co/iL3vFvG4DS